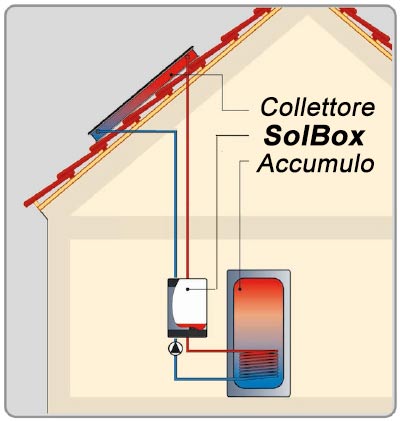 The innovative protection system patented Drain Back for solar avoids overheating of the system which can cause malfunctions and require the intervention of specialized personnel with consequent waste of time and money.

When the solar system reaches its maximum temperature, the fluid inside the collector drains into the tank SolBox

The emptying also takes place in the case of the system off or at rest. In this way there is no danger that the glycol water mixture inside the collectors will deteriorate due to high temperatures.

When temperatures return to normal, the circulation pump starts pushing again the heat transfer fluid in the solar system.

When it is cloudy, or the plant is not in operation,
all the fluid remains inside the tank and SolBox in the collectors are empty.

In the presence of solar radiation,
the system starts automatically and the fluid is pushed into the manifolds.

Upon reaching the desired temperature in the accumulation or no solar energy,
fluid flows from the collectors to the tank without SolBox evaporate. 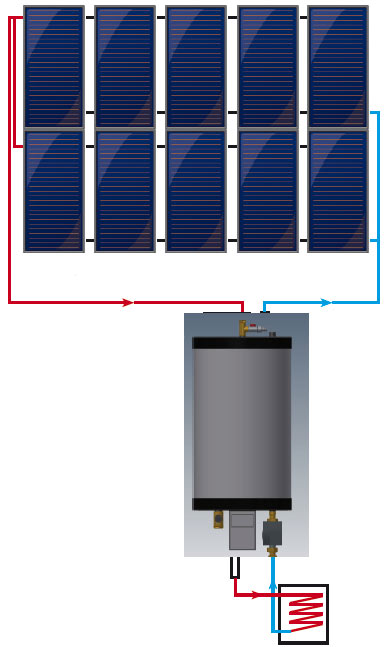 3 good reasons to install the Drain Back

No malfunctions caused by air in the system

The degradation processes that take place in the closed circuit of the system cause the formation of gases which tend to escape. These gases in traditional systems can cause malfunctions that can only be solved by resorting to specialized personnel. Air can also be created in Drain Back systems, but this does not create problems since drainage systems can work in the presence of air.

High temperatures in the system causing premature aging of glycol, lowering the yield of the system. Furthermore, the fluid undergoes an alteration of the pH can corrode the components of the system. With the system Drain Back, on the contrary, do not run the risk, the system is stopped because the collectors are empty. In this way it ensures a longer life of the plant and its components.

The system Drain Back allows also a considerable saving on electricity: during the night, in fact, it is not necessary to dispose of the excess energy, therefore, is not used electrical energy normally necessary for night cooling. 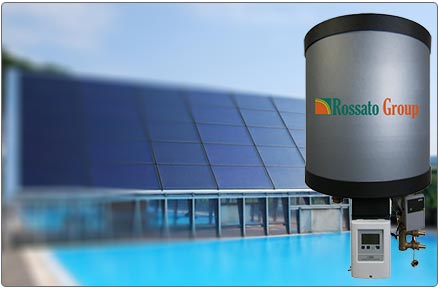 The solar panels for the system to emptying

Il SolBox technology Drain Back. SolBox is the station emptying preassembled that optimizes the efficiency and improves the safety of the solar thermal.

The SolBox installed in the solar system prevents the fluid inside the collectors from freezing during the winter and the system overheats in the summer, avoiding malfunctions and assistance with consequent waste of time and money.

Discover now the savings with the station emptying SolBox